Then and now: Top assistive technology for the vision-loss community

Over the last decade, rapid advances in assistive technology have opened up the world for those living with blindness and low vision. Who could have imagined the charge would be led by something as humble as a phone? 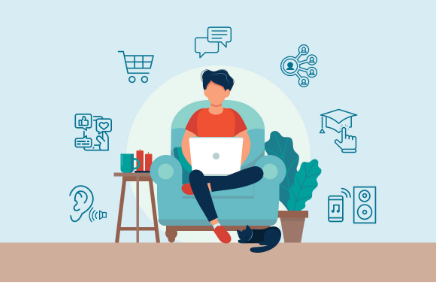 Technology changed Michael’s life. In 2009, the fourth grader switched from using a large manual brailler in the classroom to a much smaller, more advanced electronic brailler. The sleek new piece of technology was about the size of an iPad—a technological advancement that wouldn’t come to market for another year. Michael’s mom, Kristin Smedley, said the new technology opened up her 9-year-old’s world in unimaginable ways.

Smedley called the new brailler “tiny” and said it “didn’t stick out like a sore thumb,” like the manual brailler had. “Finally, Michael didn’t need an aid,” Smedley said. “He didn’t need anybody transcribing braille, because the device talked in regular print to the teacher.” The mother-of-three said the upgrade significantly reduced the barriers her sons had previously faced, including communicating with his teachers and “fitting in” with their peers. “He and his younger brother were just regular kids sitting in the classroom learning.”

Michael, now 20, and his younger brother, Mitchell, 17, were both born with Leber congenital amaurosis (LCA). The boys came of age at a time when innovative technologies were changing everybody’s lives, particularly the lives of those affected by vision loss. Some of those technologies, which include both hardware and software, evolved from products developed by, or for, people living with vision loss. Others were developed for the general public and then refined to also work for the low-vision or blind community. Today, many designers use the foundational principles of universal design—a process in which products are optimized to be used by as many people as possible. For example, a computer designed with a screen reader as part of its operating system works for the general population, as well as for those living with vision loss. Regardless of how that assistive technology arrived on the scene, Michael and Mitch’s generation were the first to realize its benefits.

The goal of way-finding advancements is the same as it is for all assistive technology, from white canes to artificial intelligence: independence, mobility, and confidence of movement.”

Technological advancements in the last two decades have been essential in striving to level the playing field for the vision loss community—whether a person is trying to ace a class at school, earn the next promotion at work, or travel the world. Here is a technology roundup of some of the newest tools that may make a difference in your own life.

Accessing the internet in all its glory
The 2007 launch of Apple’s iPhone was a technological marvel. It wasn’t until 2009, however, with the launch of the iPhone 3GS, that the device became truly accessible for blind and visually impaired users. That’s the year Apple included a screen-reading program called Voiceover, which reads out loud what is on the screen. Voiceover is now integrated into the Mac operating system, every built-in app, and all Apple devices. Users with Window’s-based technology often rely on the JAWS (Job Access With Speech) screen reader. Access to content is not the only thing these kinds of advances offer to the vision loss community. They also offer access to people.

Smedley remembers the social isolation her boys experienced before they got an iPhone. “I end up in tears just thinking about my boys’ lives before and after the iPhone,” she said. “All the things that a blind kid typically is left out of, you put an iPhone in their hand and suddenly they’re right in the center of the social scene.” For example, those who are living with low vision or blindness can now use a smart phone to access websites, text their friends, and connect via social media. And as accessibility issues have become more important to the bottom line of many social media companies, apps like Facebook, Instagram, and Snapchat have continued to evolve their product to be more screen-reader friendly. 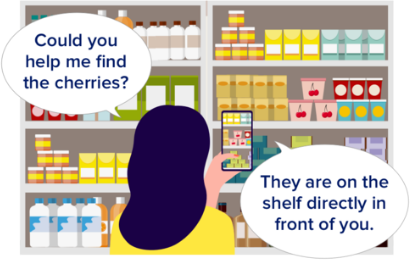 Apple inspired an entire generation of smart phones that lend a practical hand in the day-to-day lives of those living with vision loss. Smart phones support independence by allowing users to listen to audio books, check on the color of something, identify items, and even take pictures. Some of these tasks rely on third-party applications, or apps. By no means exhaustive, here is a list of some of the most popular apps used by the low-vision and blind community.

Aira
The Aira app provides a subscription service connecting you to Aira staff, who can see your surroundings using your iPhone’s camera and then help you complete your task. Whether you’re trying to locate your favorite ice cream at the grocery store or maintain social distancing at the bank, the people behind the app are there to help you do it.

Audible
Love to read but looking for something a little more human than DAISY? Audible is an audio book service offering best sellers, classics, non-fiction and more, typically narrated by professional actors. The accessible service, offered through a free app, charges a monthly subscription fee. You can try it for one month free, however, to see if it’s for you.

Be My Eyes
This free service and associated app connects you to a live person via video so you can point your phone’s camera at what you want to identify. A volunteer on the other end of the live video feed will tell you what they see.

Seeing AI
Seeing AI can “see” and describe the world around you, including short text, documents, products, currency, colors, and environmental scenes. The app can even read handwriting—sticky notes or a sweet missive from someone you love. Here’s a little known fact: the post office has been using the same kind of technology for years to scan and direct mail quickly—a great example of existing technology being leveraged to support those living with vision issues.

WayAround
The WayAround app features a tag-and-scan functionality that lets smart phones read a tag you might add to anything in your environment. For example, you can tag the clothes in your closet with descriptions and color information. Your phone both creates and reads the tag descriptions. You can order the postage sized tags at the WayAround website and your Apple or Android phone does the rest of the work.

Smart speakers
Whether you’re talking to a Google Nest, an Amazon Echo, or an Apple HomePod, today’s smart speakers are helping us all navigate home life and enjoy audio entertainment in a much more streamlined way. You can play Jeopardy, get the weather, and make a phone call; or call up audio books, podcasts, and the daily news. Smart speakers and their virtual assistants also offer assistance at a pragmatic level particular to the vision loss community.

Not only does finding even the simplest information become more efficient with a smart speaker, but the operating systems of these platforms offer customizable skills particularly helpful for those living with vision loss. For instance, there’s often no need to sit at the computer, use a screen reader, and laboriously weed through irrelevant content or poorly constructed site architecture to get at a simple piece of information. With a smart speaker, a quick voice request can deliver the information you’re looking for.

Smart speakers can boost your efficiency in other ways, as well. Order groceries through PeaPod or request an Uber while washing dishes. While each smart audio platform offers a slightly different user experience, the end result is the same: a relatively new technology here to make your day easier and more efficient.

We bring you news of advances in assistive technology when we see it. Be sure to follow us on the Eye Want 2 Know Facebook page to stay in the know!

Tomorrow’s technological advances for the vision-loss community
When it comes to assistive technology, today’s innovators are busy looking for tomorrow’s answers. For instance, in Brazil’s São Paulo metro system, the government is testing an infrared receptor device that attaches to a user’s mobile phone and provides directions from transmitters installed throughout the station. Currently implemented on one line, this way-finding technology is expected to be installed throughout the entire metro network by the end of 2021. The goal of the many way-finding products under development is the same as it is for all assistive technology, from white canes to artificial intelligence: independence, mobility, and confidence of movement.

Why I got genetically tested

Living with vision loss in a sighted world

I have read and understand the Legal Disclaimer and Privacy Policy. I authorize Spark® Therapeutics, Inc., and companies working with Spark, to contact me directly or by mail, email, fax, telephone call and text message (including autodialed and prerecorded calls and messages) for marketing purposes or otherwise provide me with information about Spark's products, services and programs or other topics of interest, conduct market research or otherwise ask me about my experience with or thoughts about such topics. I understand and agree that any information that I provide may be used by Spark to help develop new products, services and programs. I understand that my consent is not required as a condition of purchasing or receiving any goods or services from Spark. I understand that I may revoke this authorization and choose not to receive information from Spark by clicking the “unsubscribe” link provided in emails I receive from Spark.