Parenting children who have vision loss

Growing up with a sister who slowly lost her sight to retinitis pigmentosa (RP) could never have prepared April Lufriu, former Mrs. World, for the diagnosis of her own two children. Then, when the retinal specialist asked to examine Lufriu’s eyes, the world slid sideways. 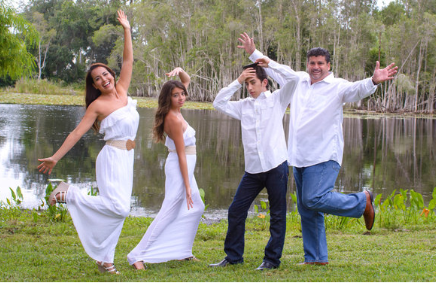 April, Savannah, Brandon, and George Lufriu near their home in Tampa, Florida.

Diagnosis: Retinitis pigmentosa (RP)
April Lufriu’s 10-year-old son, Brandon, was playing outside with friends—at dusk—when the Florida mom and former Mrs. World heard a loud noise. Startled, she ran out to see if the kids were all right and found that Brandon had run into their home’s air conditioning unit in the waning light. “He just slammed right into it,” recalls Lufriu. It was the start of an unthinkable journey for the family.

Brandon had always had a hard time seeing. “We knew he needed glasses from an early age. From the time he was small he would sit inches away from a television,” says Lufriu. She says that if Brandon dropped something on the floor, he would have to get down on his hands and knees to find and pick it up.

The air conditioning incident was followed by accidents on the trampoline, at dusk or at night, in which Brandon accidentally bounced into other children. When Lufriu made an appointment for his annual eye exam, the optometrist didn’t like what he saw and referred the family to a retinal specialist. April—whose own sister had been diagnosed with retinitis pigmentosa (RP) 21 years earlier—in 1989, panicked.

Following a series of tests, doctors delivered a clinical diagnosis that April Lufriu could never have imagined for her children: retinitis pigmentosa (RP). Not only did her son have X-linked RP, but so did her 6-year-old daughter. Then, in a startling turn of events, the eye specialist asked the mother of two to sit down so that he could examine her eyes. Within moments he delivered the news. Lufriu, 40, also had the disease. The triple diagnosis turned her world inside out.

You don’t want to be in the dark,” says Lufriu. “We have to know which genetic mutation we have so that we know whether or not we are eligible for any new clinical trials.

X-linked RP in the family
Lufriu’s family is affected by X-linked retinitis pigmentosa, which means that the gene involved is on the X chromosome—one of the two sex chromosomes. As males have only one X chromosome in each cell, one copy of an altered gene is usually enough to cause full expression of the condition. That is the case for Lufriu’s son, Brandon. In females—who usually have two X chromosomes, and therefore two copies of each gene on the X chromosome—mutations typically have to occur in both copies of the gene to cause full expression of the disorder. With only one copy of a mutated gene affected, X-linked RP in women is typically much milder. That is the case for both Lufriu and her daughter, Savannah.

However, Lufriu’s sister, Melissa, was diagnosed with severe, X-linked RP in 1989. Retinal specialists at the time used genetic mapping to identify the cause of her severe vision loss as recessive, X-linked RP inherited from her mother’s side of the family. Doctors said the disease was unlikely to pop up again, which is why—when Lufriu received her own diagnosis 21 years later—she was skeptical of its accuracy.

If this was X-linked RP, she asked her physician, how could her mother’s seven brothers have avoided the disease? “They were lucky,” he answered. “It’s like Russian roulette.” The significance of the finding was not lost on Lufriu. While she and her daughter would live with a mild version of the disease, Brandon, like his Aunt Melissa, would experience significant, progressive vision loss to the point of blindness. 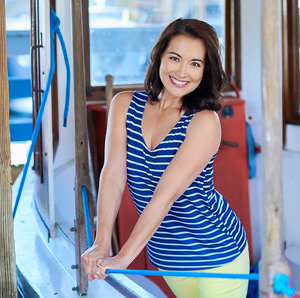 Lufriu says that the day they were oﬃcially diagnosed was the saddest day of her life. “I was shocked. I fell into depression,” she says. Lufriu had been an active volunteer with the Foundation Fighting Blindness (FFB) for years—she and her sister founded the FFB’s Tampa-area VisionWalk. When she found herself on the receiving end of the kind of support and advice she’d been giving others for years, it was a surreal experience.

After weeks of shock and depression, she knew she needed to ﬁnd a way to overcome the fear, rewrite her story, and become the kind of mom her two children were going to need as they navigated vision loss.

1. Let your challenge become your strength
“It’s easier said than done,” says Lufriu, “but the stronger you are for your kids—the more you reflect strength—the better they will be mainstreamed into life.”

2. Embrace perspective
“My husband told me, ‘What we’re dealing with is not life threatening, it’s just life altering.’ He’s right.”

3. Build a supportive home
Lufriu’s son may have retinitis pigmentosa, but that doesn’t stop him from wanting to be a pilot. “If you want to be a pilot, my gosh, we’ll figure out a way for you to be a pilot. Maybe you can fly a drone!”

5. Learn from others
“I’m telling you, when I speak to other parents I learn something new every time! The exchange of information is so valuable.”

Supporting your kids through inherited retinal disease (IRD)
As Lufriu and her husband grappled with how to talk about the diagnosis with their children, they felt like they faced two choices. They could share all the details of the condition with them, or they could give them information on a need-to-know basis, as was necessary and developmentally appropriate. They chose the latter.

Lufriu says they sought the advice of several people, including physicians, who recommended that the couple “let the kids just be kids.” They were encouraged to address problems as they arose. While some parents elect to share complete disease information with their children from the time of diagnosis, each family is different. “We wanted to protect them,” says Lufriu, “so we kind of inched them into it. We weren’t always talking about, ‘You’re going to go blind.’ We didn’t want to go there.”

At the end of the day, however, children figure things out. Not long ago, Brandon—who is now 18 and experiencing night blindness, along with declining vision during the day—acknowledged the reality of his current situation. “He told me, ‘You know, Mom, I’ll be okay if I go blind,’” says Lufriu. His words crushed her. “I almost lost it,” she admits.

Lufriu is nothing, however, if not determined. She doubled down on optimism and makes it a life’s goal to give her children encouragement, strength, and hope (see list, above).

Genetic testing and the power of hope
As a former spokesperson for the Foundation Fighting Blindness and an advocate on behalf of the IRD community, Lufriu is well-versed in the research happening around the world and finds comfort in the advances being made. In fact, Lufriu’s sister is currently enrolled in a clinical trial—something Lufriu is quick to point out to her son when he talks about going blind. “I say, ‘Pumpkin, there’s so much going on. Your aunt is part of this big clinical trial. She’s doing it for herself, of course, but she’s also doing it for you guys!’”

That research is the reason why the Lufrius underwent genetic testing in 2012 and identified their mutation.“You don’t want to be in the dark,” says Lufriu. “We have to know which genetic mutation we have so that we know whether or not we are eligible for any new clinical trials.” She also uses the rapidly evolving research landscape to encourage her kids when they feel down. “I tell them, ‘We don’t have answers yet, but medicine is always changing. There are always new discoveries.’” It’s the kind of faith that can give any child a belief in tomorrow. 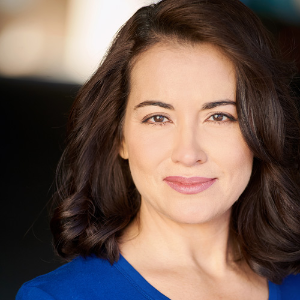 April Lufriu is a model, actress, business owner, wife, and mother. She leverages her experience as the former Mrs. Florida, Mrs. America, and Mrs. World to raise awareness about retinitis pigmentosa, an inherited retinal disease (IRD) affecting Lufriu’s children, sister, and April herself.

An IRON[WO]MAN takes on choroideremia

I have read and understand the Legal Disclaimer and Privacy Policy. I authorize Spark® Therapeutics, Inc., and companies working with Spark, to contact me directly or by mail, email, fax, telephone call and text message (including autodialed and prerecorded calls and messages) for marketing purposes or otherwise provide me with information about Spark's products, services and programs or other topics of interest, conduct market research or otherwise ask me about my experience with or thoughts about such topics. I understand and agree that any information that I provide may be used by Spark to help develop new products, services and programs. I understand that my consent is not required as a condition of purchasing or receiving any goods or services from Spark. I understand that I may revoke this authorization and choose not to receive information from Spark by clicking the “unsubscribe” link provided in emails I receive from Spark.

Are you a healthcare professional looking to order a test? Click here