A legally blind patent lawyer from Washington D.C. believed he would never play ice hockey again. Then everything changed. 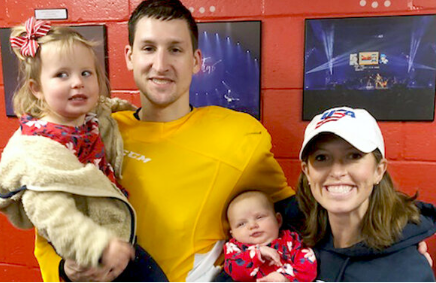 In 2018, Charlie Mitchell was having a moment. Standing in the break room of his company’s Washington, D.C. law offices, the 31-year-old started chatting with one of the firm’s partners. She knew Mitchell had progressive vision loss and told him she’d been to a blind hockey friends and family event over the weekend. Had he ever been to a blind hockey game? She encouraged him to check it out if he had any interest in hockey.

What the firm’s partner didn’t realize, however, was that Mitchell had played hockey his entire life—as a young boy, in high school, and throughout college. Hockey was “his thing.” It was also one of the many pieces of his life, of his independence, that Mitchell felt he was losing to retinitis pigmentosa (RP), the inherited retinal disease (IRD) responsible for his vision loss. The effects of RP meant that he could never play hockey again. At least, that’s what he thought at the time.

The next phase in Mitchell’s journey is a doozy: the story of how one man put his depression on ice when he became a proud member of the Team USA Blind Hockey team and a 2026 Paralympic hopeful. Like so many stories of inherited vision loss, it began with an unexpected diagnosis.

Charlie Mitchell’s metamorphosis
In 2013, Mitchell was a young husband and a second-year law student at George Washington University in Washington, D.C. As he planned for a family and a career in patent law, his life trajectory seemed clear. What he couldn’t plan for, because he didn’t have any idea about the bombshell news an eye care specialist was about to drop on him, was a life with progressive vision loss.

Mitchell began noticing vision issues after his first year in law school. He had trouble driving at night. He ran into things. And on a visit to Montana he was out with friends under an expansive, starry sky one night. “Everybody was saying, ‘Wow, look! The stars are incredible,’” said Mitchell. “I was like, ‘I don’t see anything.’”

To be honest, I was pretty skeptical. I was like, ‘What in the world is blind hockey and how does that work?’”

Then one day he and his wife, Katie, tried their hand at racquetball. She dominated him in the game until he finally told her, “Katie, I can’t see the ball.” She told him to toughen up. When he insisted that he really couldn’t track the ball, she started peppering Mitchell with racquetballs. Shocked at his inability to ward off her playful attack, she immediately drove him to the emergency room, fearing all kinds of worst-case scenarios, like a brain tumor. It was the first step in Mitchell’s diagnostic journey toward retinitis pigmentosa.

After the emergency room, Mitchell saw an ophthalmologist and finally a retinal specialist who diagnosed him with cone-rod dystrophy. It wasn’t until Mitchell pursued genetic testing, however, that he received an accurate diagnosis: retinitis pigmentosa due to a mutation in the RP1 gene. Now the lawyer knew what he was up against and could weigh his options.

“I was very enthusiastic about genetic testing because I was aware of the research going on. I wanted to know as much as possible,” said Mitchell. “I was happy that they were actually able to identify the mutation because there are a lot of people who still aren’t exactly sure what’s going on and that can be really frustrating.”

After Mitchell’s diagnosis, he stopped driving to work and began taking the Metro. He was embarrassed, however, that he frequently ran into other commuters at the stations. He wondered and worried about how different his life would now be. As time went on and his vision continued to decline he withdrew from friends, social activities, and even his wife. He threw himself into his work.

“Navigating law school and my vision loss simultaneously made the first few years of our marriage more stressful and more of a challenge than they would have been otherwise,” said Mitchell. An introvert by nature, Mitchell kept the physical and emotional trials he weathered to himself. The communication challenges between he and Katie became a third wheel in their marriage. Then along came blind hockey.

Charlie Mitchell isn’t the only thing on ice these days. So are the 2020 Tokyo games. While we all wait for the games to resume in 2021, you might like to know which para-sports for the blind and vision impaired will be included in next year’s summer games.

Blind hockey and the Paralympics
When Mitchell’s coworker had first told him about blind hockey over coffee in the breakroom, he admits he inwardly scoffed at the idea. “To be honest, I was pretty skeptical,” said Mitchell. “I was like, ‘What in the world is blind hockey and how does that work?’” Trying to be a good sport, however, he checked it out—and surprisingly, was immediately hooked.

“For the first time I met a lot of other people, either with RP or similar IRDs, who had gone through very similar experiences of vision loss,” said Mitchell, who tried out for and scored a position on the Washington Blind Hockey Club roster. “They instantly know exactly what I’m talking about. It’s really helpful to have that kind of community and comradery.” The other benefit for Mitchell is simply the ability to play the game he loves.

Blind hockey closely resembles sighted hockey with a few key differences. As the name insinuates, players have vision loss ranging from legally blind to totally blind. Then there’s the puck. The puck in blind hockey is larger, made of hollow steel, and filled with eight ball bearings. Players track the puck audibly as it slides across the ice. “It took me several months before I could hear the puck and pick it up on my stick,” admits Mitchell.

There are rule differences, as well. When offensive players enter the other side’s offensive zone, they have to complete at least one pass before taking a shot. When the pass is complete, the referee sounds a buzzer to let all players know, especially the goalie, that the puck is coming.

Canadians have been playing blind hockey for more than 40 years but it’s a relatively new para-sport here in the states where it’s been played for about a decade. Canadian boosters of the game have begun pushing to make blind hockey a sport in the Paralympics by the 2026 games in Milan, Italy. Mitchell’s dream is to play in those games. He’s certainly well-positioned to do so. While competing in Tampa, Florida this past April in an annual disabled ice hockey festival, he secured a place in the preliminary tryouts for the national blind hockey team. Then, when he attended the team’s training camp in New York, Team USA chose Charlie Mitchell as one of its six new players. 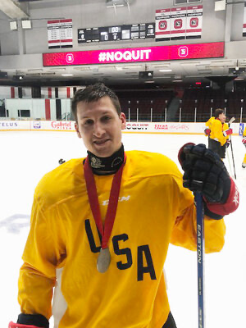 Mitchell is one of six new members on Team USA’s blind hockey team.

“Blind hockey has been life changing for me,” said Mitchell. “I was in a negative mindset where I just didn’t think I could do a lot of the things that I liked to do anymore because of my vision.” When Mitchell learned that he could get back on the ice, however, he emerged from the isolation and darkness that had plagued his life since diagnosis. Now, his marriage is stronger than ever, he has an audacious goal, and he understands that he is in a position to change the lives of others as well.

“We played an exhibition game in Minnesota in February at the state’s big para-hockey festival,” said Mitchell. Kids who are visually impaired or living with other disabilities came out to watch, asking the players for autographs, sharing high fives, and dreaming of what they might be able to do someday. “They are thinking, ‘I could play on Team USA one day, despite my visual impairment,’” said Mitchell. “That’s really cool to see. To just know that you have the opportunity to inspire the next generation.” #PuckDrop 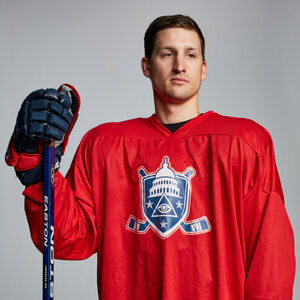 Charlie Mitchell is a Washington D.C. patent attorney and a lifelong hockey player. After his diagnosis with retinitis pigmentosa, the lawyer, husband, and father of two thought his days on the ice were over. Then he discovered blind hockey. Mitchell now plays on both the Washington Blind Hockey Club and the USA Blind Hockey teams. He has his eyes set on the 2026 Paralympics.

My guide dog and me: A renewed sense of independence with retinitis pigmentosa

I have read and understand the Legal Disclaimer and Privacy Policy. I authorize Spark Therapeutics, Inc., and companies working with Spark, to contact me directly or by mail, email, fax, telephone call and text message (including autodialed and prerecorded calls and messages) for marketing purposes or otherwise provide me with information about Spark's products, services and programs or other topics of interest, conduct market research or otherwise ask me about my experience with or thoughts about such topics. I understand and agree that any information that I provide may be used by Spark to help develop new products, services and programs. I understand that my consent is not required as a condition of purchasing or receiving any goods or services from Spark. I understand that I may revoke this authorization and choose not to receive information from Spark by clicking the “unsubscribe” link provided in emails I receive from Spark.

Are you a healthcare professional looking to order a test? Click here